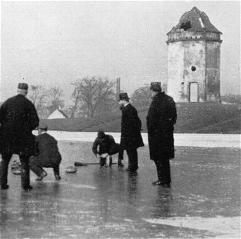 A meeting took place on 10th.March 1892 at the Central Halls, Cambuslang, when it moved that a Golf Club be formed to be called Cambuslang Golf Club. Mr A.G.Barns Graham was elected President, Mr Charles Christie, Captain, and Mr Robert Duncan, Secretary and Treasurer. It was left to the latter to arrange with Mr Muirhead, tenant of Westburn, about securing his field at the most favourable terms possible.

The issue of Golf Magazine of 19th February 1892 reports: A Golf Club is at present in course of formation in Cambuslang, and a suitable links for the game has been secured in Westburn green, which extends to over thirty acres. The green is a picturesque old park, not more than five minutes from Cambuslang Station and will afford scope for a nine holes round. In addition to considerable diversities of level, there are two small streams running through the ground, and these, with a curling pond.

On the 15th April 1892 the Golf Magazine reported: The new links at Westburn Green, which Willie Cambpell visited and laid out a few weeks ago, were formally opened on Saturday 9th April by Mr Charles Christie, Captain of the Club. The first Annual Meeting was held on 26th April 1892 when copies of the Bye-laws prepared by the Directors were approved and adopted. An annual subscription of 1 was approved. In June 1892 Mr James King was appointed to keep the green in order twice weekly at a wage of 4 shillings (20p) per week.

In March 1895, the then tenant of Westburn, Mr Muirhead, gave the Club notice to quit, but this gave the chance to open negotiations with the Commissioners of the Duke of Hamilton for the lease of Westburn Green. These were successful and the lease was concluded for ten years at a cost of 85 per annum as long as the membership remained at 130.

Now that the Club had gained security of tenure, it was agreed in January 1896 to erect a Clubhouse. The new Clubhouse was opened at precisely 3 pm on the 30th May 1896 by the Captain Mr James G. Jenkins. It had been built at a cost of 264.47p and the architect was Mr A.L.Miller. In May the same year, Mr Willie Smith was appointed as Professional, and on the 9th June set a course record of 69.

In September 1921 a letter was received from the Factor of the Duke of Hamilton Estates stating that it was impossible to arrange a further ten years lease for the Club. Despite action being taken by the Club, a final letter of 4th November confirmed that the lease could not be renewed and the land would be sold.

In April 1922, the course was officially advertised for sale, but happily in June and due to much work and effort by the Committee, it was agreed to purchase the course at Westburn Green for 1,760 from the Duke of Hamilton estates as from 10th June with entry at Martinmas (November).

The membership of the Club in January 1923 comprised 173 ordinary members, 87 ladies and nine juniors.A Special General Meeting of the Club on 19th December 1934 agreed to the reconstruction of the Clubhouse and the lowest offer of 1,468.41p was received from Messrs. Mathew Simpson Co.Ltd. of Govan, with the necessary reconstruction starting on 28th January 1935. The Clubhouse was officially opened on 1st June 1935, by Mrs J.M.Barr, wife of the Club Captain.

A Special General Meeting was called on 29th March 1962 to deal with the Lanark County Council Compulsory Purchase Order. This would involve the loss of the Clubhouse and part of the course, but fortunately not immediately, though there would be compensation for this loss.

At a Special Meeting held on the 30th April 1970, in agreement with the Planning Committee, Messrs Findlay McGeechan Co. Ltd (Tollcross) were awarded the Contract to build the present Clubhouse at a cost of 48,315.

The new Clubhouse was officially opened on Saturday 8th May 1971 in the presence of the President of the Scottish Golf Union Mr James Ferguson and Club Captain Robert Brown. Mrs James Blyth, wife of the Honorary President, declared the new building open and unveiled a commemorative plaque, on this really memorable occasion. Since then, we have remained in the clubhouse pictured above, but there have been a number of improvements to the course – not least in substantial tree-planting and landscaping.